The ruling deity is Shiva and the ruling planet is sun. Shiva, but also by Mahalakshmi. This rudraksha enhancesthe powers of the mind like concentration and bestows all the benefits of the respective Planets and Deities. People suffering from delay in job, marriage, ill effects of Planets, lack of Love & Peace or any physiological ill effects can wear Rudrakshas after consulting with the Expert. 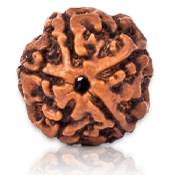 Please let us know all your details below -

Note-In the year 2006, it is for the first time, Rudraksha have been considered as an organic gem material and their gemological properties along with the bio effects have been codified and presented to the gemologists at the IGC - 99 by Mr. Manish Jain. Bio effects due to the use of Rudraksha as individual beads as in rosary indicate that they definitely have some effect on the nervous system and therefore may further influence the autonomic nervous system .i.e. the sympathetic and parasympathetic nerves. These nerves when simulated are responsible for the secretion of hormones that can increase or decrease the rate of chemical reactions in the human body. Rudraksha act as a capacitor and store electrical energy when placed between two conductors.

Rudraksha is consisted of two words: rudra and aksha. The meaning of rudra is one who weeps while aksha comprises A (अ) means to receive and ksha (क्ष) means to give. In nut shell, we can say that the meaning of the sacred seed is the one that gives us health, happiness and help in eradication of evils. It is grown in the Himalayan regions like Nepal, Indonesia, Java, Sumatra and Myanmar. About 70 percent of the trees are found in Indonesia, 25% are found in Nepal and 5% are found in India.

The pious plant has important position in ayurveda. It is regarded as just like Sanjeevani in ayurvedic scripture because of its diseases and disorders prevention. Its health benefits were known since the ancient times; however, it had been used conventionally for prayer beads in some sects. It has been using as organic ornament or mala that is generally worn